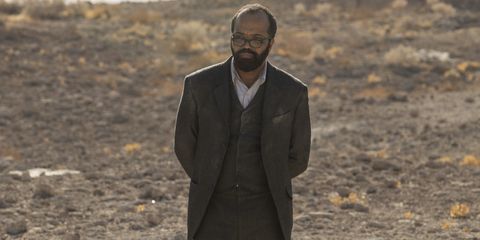 Though tonight's episode marked the end of Westworld Season 2, the show is still guaranteed to come back online. HBO renewed the series for a third season back in May, just two weeks into its 10-episode sophomore run. With tonight's finale likely leaving us with more questions than answers, here's everything we know about the next season thus far.

When will Westworld Season 3 air?

In a recent interview with HuffPo, Ed Harris, who plays the Man in Black, revealed that Season 3 wouldn't start shooting until June of 2019—which means we're looking at 2020 premiere at the earliest.

Westworld's second season premiered Sunday, April 22 after a 16-month hiatus. "We said very early on that we wouldn't be able to turn this around every year," co-creator and executive producer Nolan told The Hollywood Reporter in December 2016. He also hinted the time between seasons would likely span a year and a half: "In film, my other life... the best we could do is turn another one around in three years. I really feel like we're splitting the difference here."

"I was just told that, 'Hey, you’re getting equal pay.’ ... I almost got emotional," Wood told The Wrap. "I was like, ‘I have never been paid the same as my male counterparts ... I’m always fighting for that, and I have turned down projects—Westworld, it’s like, I get it a little more. It’s like, ‘Well, you’re Anthony Hopkins or Ed Harris.’ But I think now we’re all doing equal amounts of work and really hard work.”

What will it be about?

With Season 2 still airing, Westworld's Season 3 storyline is still relatively unknown, but Nolan promised to resolve some of the show's central mysteries by the end of the second season. “We want to feel like the show is rocketing ahead," he told EW.